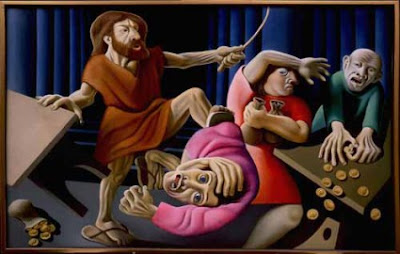 Malachi 3:1-4The offerings of  and  have been less than pleasing and have wearied the Lord. Blind, lame and sick animals are substituted for lambs without blemish and the Lord would rather the temple doors be closed and locked than endure the stench of such dishonest offerings. The priests participate and profit from the scheme while the workers are oppressed, widows and orphans are not cared for and the alien is thrust aside. Perhaps it was because God seemed distant and the rules and regulations of the covenant relationship appeared arbitrary and economically oppressive. What’s a blind ram to an invisible God? And so corners are cut and liberties are taken and before you know it the relationship that enriched the people and God has impoverished both. Therefore God will pay a visit to the temple and do some housecleaning. With overturned tables and coins of money changers scattered the refining fire speaks the word of judgment, “It is written, my house will be a house of prayer but you have made it a den of robbers!” Not a week later the fullers’ soap speaks the cleansing word from a hill above the temple, “It is finished.” We who are more like  and  than we care to admit need to hear the word of the refiner when our offerings are less than the best and corners that count are cut. And like Judah and Jerusalem in days of old our cleansing word will make our offering pleasing to the Lord.
Posted by Phillip Heinze at 4:21 PM