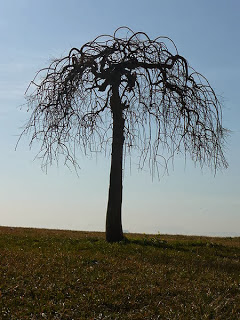 “Increase our faith” is a reasonable request and in the asking the disciples are obviously hoping for an answer in the affirmative. Instead Jesus appears to rebuke them. If you would use the faith you have you wouldn't ask for more. The mulberry tree uprooted and planted in the sea means even the smallest amount of faith can accomplish what otherwise appears impossible, or even foolish, for who would plant a tree in the sea? Luke doesn't record the disciple’s response but I imagine they were disappointed by Jesus’ answer and maybe a little confused as to what Jesus meant by commanding trees to be uprooted and planted in places that trees are not meant to be. Years later with mustard seed faith they would understand that doing what they were commanded to do was not so much about faith as obedience. Speaking the truth by the command of Christ their mustard seed faith would move an empire to be planted in the faith it once tried to uproot. So what might this mean for those of us who are accustomed to compliments for faithful service? It might mean that increasing in faith is not a prerequisite for using what we have and that in the exercise of mustard seed faith we are uprooted from the familiar and safe places and planted in the sea.
Posted by Phillip Heinze at 11:06 AM