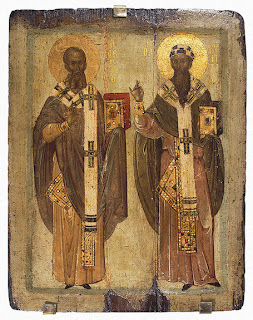 “In the beginning God created…” seems to divide the Trinity by function, the Father calling forth Creation while the Son and Spirit wait in the wings for the Cross and Pentecost. The two creeds we confess liturgically, the Apostle’s and Nicene, don’t help in that “I believe in God the Father” appears to give sole credit for creation to the first person of the Trinity. There was a time when we trotted out the Athanasian Creed on Trinity Sunday but it’s fallen out of favor due most likely to its length and perhaps the damning to hell all things Arian. Arius argued that a son by definition must come from a father and so there is a time when a son (even the Son of God) is not.  Athanasius disagreed in no uncertain terms. God is and always was Father, Son, Spirit all at the same time in every way from before the beginning. We don’t have a lot of scripture to lean on as the doctrine of the Trinity was not as important in the beginning of the church as it came to be a century or so later. But you might have noticed that in the creation account God creates humankind in the image of “us” and while that is not proof for the doctrine of the Trinity you could read it that way, in which case Athanasius would applaud and Arius might understandably roll over in his grave.
Posted by Phillip Heinze at 3:16 PM