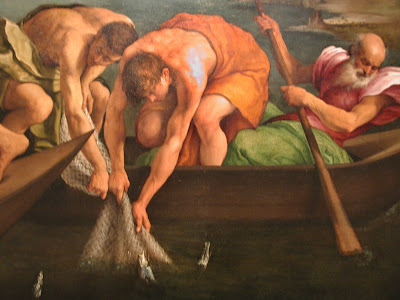 I don’t want to burst any Bible balloons but Matthew’s call of the disciples is quite different from the Gospel of John. I’m guessing most people don’t notice week to week the discrepancies that crop up in the scriptures but surely this week someone in the pew will listen to the preacher read the Gospel according to Saint Matthew the fourth chapter and remembering last week’s Gospel according to Saint John the first chapter raise an objection. They can’t both be right, can they? In the past I would have suggested they were two different and unrelated accounts of the same story and we shouldn’t make them do what they didn’t intend to do, namely agree. Matthew written before John didn’t read John and John written after Matthew thought there was more to say. But what if – and here I apologize to all my New Testament seminary professors unless my “what if” is original and makes sense in which case I want credit – what if John’s story written last comes first and Matthew recounts a calling of Andrew and Simon (called Peter) who’ve known Jesus for some time? So this is the timeline. Last week’s Gospel comes first. Andrew, a disciple of John the Baptist, follows Jesus to where he is staying bringing his brother Simon who Jesus renames Peter. There is “not recorded time” when Andrew and Peter keep fishing dividing their time between John and Jesus. And then when John is arrested the Jesus in Matthew comes calling and says “follow me” which they do because the one who invites them is known to them. That makes more sense to me than two fishermen leaving their nets to follow a perfect stranger. That’s how it is with us, isn’t it? We risk the following, just like they did, but only because we know the one who invites us. They didn’t know where he would lead them or even what fishing for people meant but in the unrecorded time between Andrew’s inviting and Simon’s renaming they had come to know that the only place they wanted to be was with Jesus.
Posted by Phillip Heinze at 12:09 PM