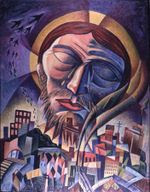 It is a vision offered to people whose strength like a bruised reed was close to breaking, whose hope like a dimly burning wick was all but quenched. Sitting in the darkness of captivity they might have preferred a servant with a little more chutzpah. Instead the chosen servant, in whom the Lord’s soul delights, will quietly bring forth justice by revealing the Lord’s righteousness, opening eyes blind to the new thing now declared which is freedom for those held prisoner to sorrow and suffering. It is declared before it springs forth as former things are coming to pass so that those who grow faint and are nearly crushed will trust again that even in the deepest darkness there is a light that shines in the heart that hopes in the Lord. They didn’t have too long to wait before this word was literally true for them and released from the dungeon of Babylon they returned unto Zion with singing. The One who we identify with this “servant song” will still take a few centuries to spring forth but in the end will accomplish more than the captives could have ever imagined for Jesus growing faint, crushed by the weight of the cross, cries out with a loud voice, “It is finished” and so it is. Then what are we waiting for if Isaiah’s vision has been fulfilled? Could it be that we are the ones called in righteousness that God is waiting on to be a light to the nations, sight for the blind, release for the prisoners, to faithfully bring forth justice in the earth? Talk about chutzpah.
Posted by Phillip Heinze at 11:55 AM